Competition for talent continues, with job openings in finance and insurance reaching a record level of 401,000 in June*, surpassing January’s revised record of 376,000 (originally reported as 411,000) and contributing to an average level of 367,000 open roles for 2022 so far. Comparatively, the same timeframe in 2021 (January through June), saw an average of just 252,000 open positions.

The overall U.S. economy has experienced 19 months of continued job growth and saw an increase of more than half a million jobs in July, reaching February 2020’s pre-pandemic employment levels and surpassing economists’ expectations. The insurance carriers and related activities sector is nearing the same milestone, adding roughly 35,000 jobs this year. As insurers continue to make adjustments and realign to be most successful moving forward, it’s likely movement will persist amid an increasingly competitive recruiting climate.

For additional insights on insurers’ hiring plans for the next 12 months, join us for a complimentary webinar on August 11, discussing the results of the Q3 2022 Insurance Labor Market Study. Register here. 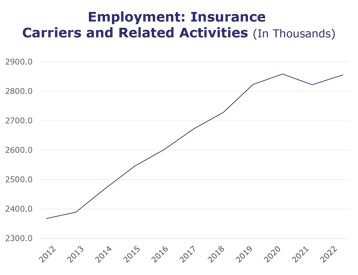 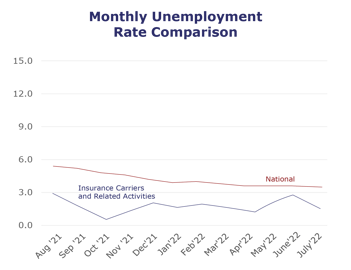 BLS Reported Adjustments: Adjusted employment numbers for June show the industry saw an increase of 8,600 jobs, compared to the previously reported increase of 7,200 jobs. The BLS continues to revise numbers to be most accurate, which may contribute to inconsistencies, depending on when reports were pulled.