Unemployment for the insurance carriers and related activities sector rose slightly in May to 2.5%. While the insurance industry as a whole has lost 15,000 jobs since February, the average unemployment rate for 2021 so far is a mere 2.3%. Property and casualty, and life and health carriers have seen the bulk of the job losses at 4,000 each.

The job losses may be, in part, due to the difficulty carriers are experiencing filling positions given the low unemployment and the fact that the number of job openings in finance and insurance are increasing. While this is certainly something to watch, we’re optimistic the numbers will be less drastic once the final adjusted BLS numbers are released, as is often the case.

As the country continues toward its goal of being fully “open,” it’s likely work arrangements and differences in expectations between workers and employers will affect job openings, turnover rates and possibly even unemployment levels. 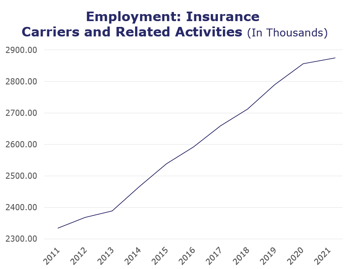 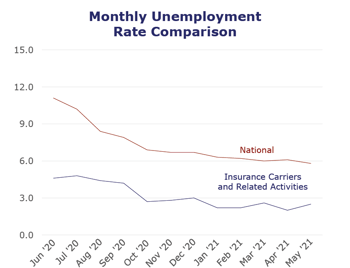 BLS Reported Adjustments: Adjusted employment numbers for April show the industry saw a decrease of 9,400 jobs, compared to the previously reported decrease of 7,000 jobs. The BLS continues to revise numbers to be most accurate, which may contribute to inconsistencies, depending on when reports were pulled.