According to the Bureau of Labor Statistics, January* saw the largest number of open finance and insurance jobs in at least two decades. Hires and quits are also relatively high, further illustrating the industry reshuffling that has occurred throughout the last several months.

The industry unemployment rate remains low; and while employment for insurance carriers and related activities is still below pre-pandemic numbers, it has steadily grown since July 2021. This, paired with the high number of open jobs, indicates insurers are unable to fill their open positions. Additionally, in our recent Q1 2022 Insurance Labor Market Study, conducted in partnership with Aon plc, both demand for talent and overall recruiting difficulty were at the highest ever measured. Insurers are continuing to combat one of the most challenging and competitive labor markets many have ever experienced. 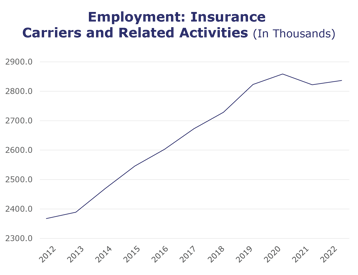 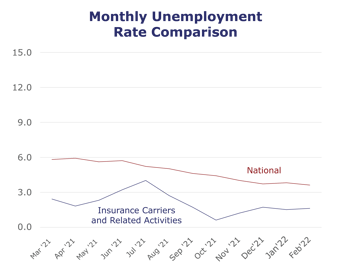 BLS Reported Adjustments: Adjusted employment numbers for January show the industry saw an increase of 2,300 jobs, compared to the previously reported increase of 4,800 jobs. The BLS continues to revise numbers to be most accurate, which may contribute to inconsistencies, depending on when reports were pulled.

*This is the most recently available information from the BLS JOLTS report, which began collecting data in December 2000.

**The BLS reports on wages and employment for the industry category are only available for two months prior.