Open Enrollment: Is Your Organization Prepared?

It is my pleasure to introduce a guest blogger for this latest post. Abbe Sodikoff is a senior vice president and health sales manager here at Jacobson, providing leadership to our subject matter experts health services team. Her insights into open enrollment are worth a read. Enjoy…

The 2016 healthcare open enrollment period is nearly here. Slated to run from November 1, 2015, through January 31, 2016, this year’s enrollment season marks the third year since the introduction of the Patient Protection and Affordable Care Act (PPACA). Despite having two enrollment periods already completed, insurers still struggle with how to handle the influx of new customers during this peak period.

During the 2014/2015 open enrollment period, insurers responded to 15.8 million calls to the marketplace call center, while HealthCare.gov saw nearly 1.86 million visitors to its website on just its peak day. Despite months of preparation, a number of insurers found themselves unable to keep pace with the demand. Even outsourcing venues were tapped out as a staffing resource.

In 2014, nearly 8 million individuals were insured using the healthcare exchange. In 2015, that number increased to 11.7 million; and the high volume trend is expected to continue in 2016 with estimates at 21 million. A key driver of the expected increase is the “individual mandate tax,” which will raise the cost of remaining uncovered to either 2.5 percent of an individual’s yearly household income or $695 per person. As a result, health plans are looking to increase their sales call center staffs by as much as 20 percent.

In fact, the PPACA has created massive employment gains in the health insurance industry. Last year, the industry grew 2.23 percent compared to the anticipated growth rate of just 1.77 percent. The health industry now stands at record high employment, with 515,000 professionals currently employed—an increase of 37,500 since the initial launch of PPACA. 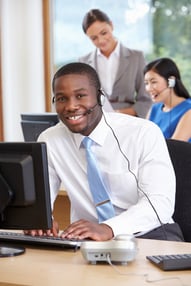 Despite the increased employment, insurers are concerned that they will once again find themselves overwhelmed and unable to handle the expected historic enrollment volumes. Customer service, sales and enrollment continue to be areas of tremendous need. In order to successfully prepare, savvy insurers have already begun exploring ways to mitigate a staffing shortage during this busy period. As part of their contingency plans they are developing partnerships with local, contract and healthcare staffing resources to ensure they can fill talent gaps with trained professionals who can hit the ground running during the peak of enrollment.

Here at Jacobson, we, too, are already ramping up for the 2016 enrollment period. Our staff is filling our pipeline with qualified candidates who can help health insurers meet their timely needs.

Is your organization prepared to tackle the 2016 open enrollment period?