The results from our latest Insurance Industry Labor Market Study are now available! Since its debut in 2009, this bi-annual study has become an accurate predictor of the industry’s staffing outlook. Read on for highlights from the most recent study or download the full results. 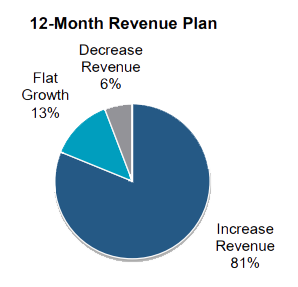 With 81 percent of insurers surveyed projecting growth, expectations to increase revenue are now 11 points higher than they were in January. This is the first time since July 2012 that expectations for revenue growth have increased between the January and July survey periods. Large and mid-sized companies reported the greatest optimism for revenue growth, at 84 percent and 85 percent, respectively.

According to the results of our survey, 62 percent of companies plan to increase staff during the next 12 months. Although the projection is slightly lower than the 65 percent reported in January 2017, it is consistent with recent trends and represents a steadying market. If the industry follows through on these plans, we will see a 1.14 percent increase in insurance employment throughout the next year. This predicted rise is being driven by personal lines organizations—with 73 percent forecasting an increase in staff. Small companies, with fewer than 300 employees, are anticipating the most significant increase in employees, with 75 percent reporting a plan to grow their staffs in the next year. 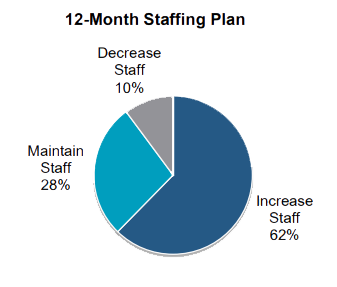 Insurance organizations are primarily motivated to hire as the result of currently understaffed functional areas. Nearly half of the companies surveyed listed this as their primary reason for adding new employees. An anticipated increase in revenue was the second most common driver, with 45 percent of companies listing it as a reason to hire.

In light of these widespread forecasts for growth, it is unsurprising that only one in 10 organizations plans to decrease staff during the next year. One notable change from previous surveys is the number of companies citing automation as the primary reason for reductions in staff. Twenty-six percent of companies reported this as a potential factor—the highest percentage in the history of the survey.

Continued staffing growth, the mounting rush of industry retirements, the current mid-level skills gap and a lack of incoming young professionals are all contributing to a tightening insurance labor market. Further compounding this shallowing talent pool is a growing demand for skilled professionals. Within the finance and insurance sector, the number of job openings is undoubtedly on the rise. According to the U.S. Bureau of Labor Statistics (BLS), there are currently 267,000 openings in finance and insurance. This is the highest amount reported since the inception of our study in 2009. This mounting number of open positions points to job growth and a lengthening time-to-fill.

In fact, ten of the 12 functional categories included in our survey were rated moderate or difficult to fill. Five of those 12 saw recruiting difficulty increase slightly. Analytics, executive and actuarial positions continue to top the list of positions considered most difficult to fill. As many industry positions remain unfilled, insurance organizations must rethink their current recruitment and engagement strategies. They must shift their attention to training mid-level employees, recruiting strong Millennial and Gen Z talent and filling active gaps with interim workers.

Temporary Staff as a Rising Solution

Faced with pressing talent challenges, many companies are drawing upon temporary staff. In fact, the use of temporary employees has been on a rapid growth trajectory since the economic downturn. This accelerated use of interim professionals continues, as 90 percent of companies are planning to maintain or increase their use of contract employees. 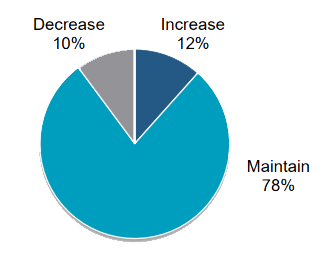 According to the BLS, temporary employment across all sectors has grown by 57,200 jobs since January. The temporary penetration rate for the overall labor market—the number of temporary jobs as a percentage of total employment— has reached 2.07 percent. This marks immense growth from the 1.34 percent reported in July 2009.

The use of contract or interim talent may be key to the future of insurance industry staffing. Many organizations are utilizing a “run lean” staffing mentality, making interim employees a key talent resource. Simultaneously, many experienced professionals are now opting for contract work, enjoying the flexibility, specialization and diverse projects that this type of work has to offer.

As the insurance industry maintains a strong pattern of revenue growth, continued staffing demands and a narrowing labor market are highlighting the need for new talent solutions. For further insights into the Insurance Industry Labor Market Study, download the full results.