The insurance industry saw the unemployment rate fall to just 2% in April, its lowest since March 2020 and comparable to 2019’s pre-pandemic numbers. The Bureau of Labor Statistics also reported a loss of 7,000 insurance jobs; however, it’s likely these numbers will be revised in subsequent months’ reports. The overall U.S. economy saw unemployment remain relatively flat and added 266,000 jobs; unfortunately, this is far from the 1 million job increase many economists were anticipating.

Conversely, we’re feeling an uptick of activity in the industry, as insurers focus on their next steps, move forward with new technology and automation, and begin to orchestrate returning to the office. At the same time, there’s a renewed emphasis on effectively managing hybrid teams in a way that respects alternate work schedules and accommodates individual comfort levels and needs. 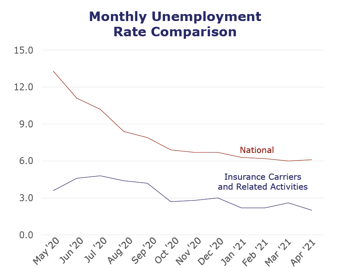 BLS Reported Adjustments: Adjusted employment numbers for March show the industry saw an increase of 9,600 jobs, compared to the previously reported increase of 11,200 jobs. The BLS continues to revise numbers to be most accurate, which may contribute to inconsistencies, depending on when reports were pulled.