The first half of 2014 is looking strong for the insurance industry talent market. Employment is on the rise and the current unemployment rate has reverted to levels the industry has not seen since before the Great Recession.

While continued economic recovery (albeit slow) has driven gains in throughout the insurance industries, the health insurance industry has seen the second greatest gains so far this year, following agencies/brokerages. Driving this momentum is the wave of hiring that has accompanied the implementation of the Patient Protection and Affordable Care Act (PPACA). While the new health insurance law officially took effect in March of 2010, many of its major provisions—including the health insurance exchanges—were phased in this past January.

According to the BLS, in March 2014 alone, 1,300 positions were added to direct health and medical insurance carriers. This brings the total medical and health insurance job growth throughout the past year up to an estimated 19,300 jobs—the highest annual increase since June. 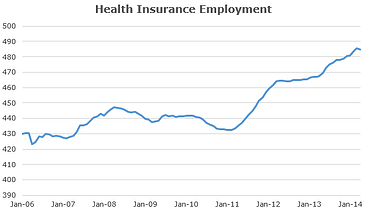 For the years leading up to this major provisions rollout, health and medical insurance carriers have debated both the short-term and long-term effects of the law. It is clear, with the first PPACA-influenced enrollment period officially complete, that the short-term effect is a significant uptick in industry employment. In fact, we saw unemployment gains normally unheard of in the insurance industry thanks to the PPACA’s stimulating effect on the health insurance labor market.

Despite these positive short-term results, there is still much speculation regarding the long-term impact PPACA will have on the health insurance industry and the broader economy. As mentioned in a previous post, the industry is expected to see continued, and likely accelerated, cost escalation as a result of the increased market interference. Of course, this means higher premiums for the industries customers: Corporate America. The upcoming implementation of the “employer mandate” in January, 2015 will add another layer of reporting complexity and potential costs to many employers. Taken together, these rising costs will inhibit future labor growth in the broader economy.

Less than six months into the implementation of the law’s major provisions, many are anxious as we wait and see how the forced changes to the industry play out.

What are your thoughts on how the PPACA will affect the health insurance industry in the long-run?